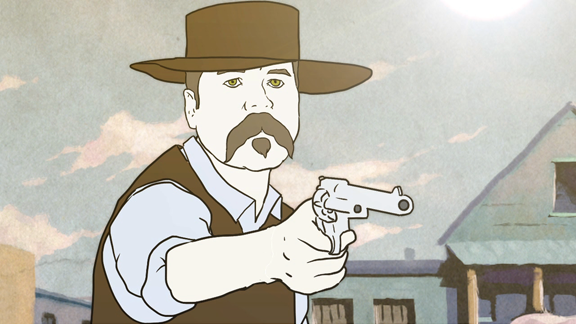 In a lawless land of death and misery Wyatt Earp is forced to decide what kind of man he’s gonna be. This eight part  web series is based on the nearly true story of America’s original Western hero.

What happens when a natural born coward must fight to defend his love and avenge his family? He becomes a legend, whether he wants to or not.

The score is written and composed by Okkervil River’s Justin Sherburn, sound design is by Buzz Moran of Intergalactic Nemesis, with original songs written by Roger Wallace.

Production started April 29th, 2013, and continues through the summer of 2013 in Austin, Texas. EARP is produced through a partnership with Aphid Animation (founded by Craig Staggs & Kevin Peake after the two worked as animators on Richard Linklater’s A Scanner Darkly), Minnow Mountain (a new transmedia studio started by Craig Staggs and longtime producer Steph Swope to develop original content), and F/N Entertainment (a new independent private financing company headed by the award-winning producer, K. Josie Collier).